The Up Experience, Truly Uplifting

I have owned my own business for over 12 years and been in the position to select speakers for more than 30 years so it is a real treat for me to be exposed to new speakers. And of course, there are some old favorites I loved hearing again.

Thoughtfully, there were two “local” speakers focused on Houston, one in the first segment and one in the second segment, each referred to as Houston Up Close.

First was Dr. Stephen Klineberg. Dr. Klineberg is a professor of Sociology at Rice University. He presented incredible data on the demographics of Houston. Houston is changing and is one of the most diverse cities in the US. The information he gave would be perfect for any businessperson in Houston as they put together their strategic plans for the future.

Dr. David Eagleman, a hip, young neuroscientist, followed. He was back by popular demand from last year and not only spoke at the event, but was also the emcee. Dr. Eagleman had a way of using real life examples about men and women to explain how the brain works which had the audience laughing and nodding their heads at every example. Not only was he a hit with his presentation, his emceeing had the same effect. 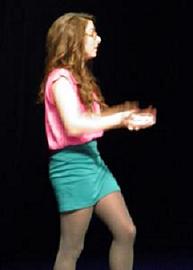 Our bureau booked Katie Linendoll for the event and she was a home run! What a perfect name for this sharp young tech guru – she truly is a doll! Everyone loved her energy. She is interactive and fun while taking the audience into the future of technology and gadgets.

Katie was followed by Joshua Cooper Ramo. I have heard Ramo before at Southern Methodist University’s Tate Lecture series. He is extremely smart and an expert on China. His unique perspective opened our eyes and he had the data to back it up on how the Chinese and Americans differ from cultural perspective.

Bob Stutman, the former head of the New York office of the Drug Enforcement Agency, rounded out the hour. Bob gave the audience a look into the ever present drug epidemic in school’s today. He gave shocking statistics on children and the rise of drug use, paying close attention to the increase in over-the-counter drugs.

And these speakers were just the first segment! It’s amazing what you can learn in an hour when you take the time to get out of the office and expose yourself to something new! The next blog will cover Segment Two.