PRODUCTION
If you are going to do it right, you have to go big or go home.  Don’t skimp out on production.  Every detail was thought out on the production of the event I attended in NYC.  At Radio City Music Hall, the Rockettes were in full force, even dancing with the top-award nominees on a moving stage.

If you are going to have an awards event in the Ballroom at the Waldorf Hotel, borrow this great idea. The top award nominees were staged on the second-level which resembled the box seats at an opera house. The nominees were spotlighted as they were introduced. This allowed them to wave to the audience below and be recognized ala Eva Peron. It was dramatic and fun. What a great production call based on the lighting and the venue! 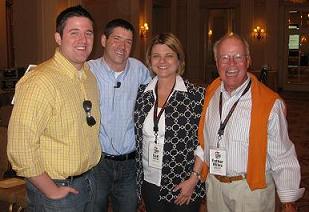 The first day at the NYC humanitarian event, I was speaking with an attendee. I said “Being out of the office for four days is a lot for me.” He just smiled back at me and said “By Wednesday, you will wish it was seven days!”

He was right. This event was one of the most meaningful and memorable because I could really see the passion behind the employees and how they really cared about giving back. Our days were spent stuffing over 10,000 boxes filled with snacks that were shipped off to our military troops. It’s unusual to find incentive trips where employees are this passionate about philanthropy and giving back.

As a former incentive trip event planner, I think back on all the money I spent orchestrating team events like photo rallies, beach Olympics, golf tournaments, etc. They all cost money and inevitably some of the attendees were not satisfied with the overall choice. I remember when my friend Tim Sanders, speaker and author, told me how important social responsibility is to the next generation. Giving back just makes sense.

I’ve come to the conclusion that the secret sauce to an incentive event is putting heart into every aspect of it.
This is so important and I am not sure it can be taught.
It takes a passionate person with a vision to create the perfect idea and a strong team to execute the ideas correctly. This event was one of those that was delivered 100% from the heart. 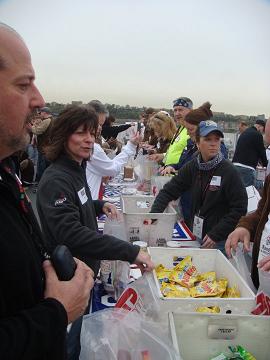 We have all done recap videos, but Texas Roadhouse took the use of video to a new level. In a very effective way they used top-award nominees to tell the story of the company culture through the use of video. Genius!

There was no talking “C-level suits” dictating their thoughts on the company culture….Instead, it was just the proud, award contenders on the front line sincerely, genuinely and passionately talking about the company’s culture from their perspective.

These videos were shown throughout the days at the event which helped everyone get to know the top award nominees. Talk about an idea worth borrowing!

CREATE AN EXPERIENCE
I have long said that anyone can plan an event, but it takes a certain kind of person to be able to create an experience.

Being in New York City, Texas Roadhouse had a vast number of venue choices to create not just an event, but a unique experience for their employees.

Their opening reception began on the ice at the Rockefeller Center (maybe I should clarify…they literally put a floor on top of the ice). Following the opening reception, the awards ceremony was held at the Radio City Music Hall with the Rockettes and later a Broadway tribute for the awards evening.

Texas Roadhouse really wanted to have a real NYC experience so they provided each person with metro cards and instructions on taking the subway to Battery Park. They then provided a ferry that took everyone to the Statue of Liberty in order to give us a final evening on Ellis Island. I love the way this was orchestrated and to top it all off, they had a live concert and the backdrop behind us was of the Manhattan skyline. It was PERFECT!

FORMAT
Anyone who plans multiple day events knows that putting together the right format is essential to the overall flow. I loved the Texas Roadhouse format. It flowed and made so much sense. 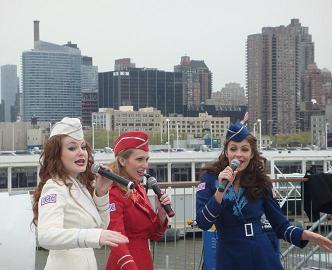 Here is the layout of our days’ events and some notes on why it worked:

Day 1- Welcome and kick off

Day 2- General session in the morning.
Free time in afternoon and dine around the city for the evening.

Day 3- This was the Humanitarian day and the Awards night was that evening.
I like the general session being broken up between day 2 and day 4.
I like the contrast of giving back and doing philanthropic work for others coupled with a black tie celebration to show appreciation for their employees.

Day 4- General session and the final event.
I love the idea of having a finale the day after the awards celebration.
Too often the awards ceremony is the final night and the award winners miss out on all the congratulatory comments.