I also read a quote in Randy’s obituary from his father saying that “overcoming drug addiction was probably his biggest battle.” How did I not know that? What kind of a friend/listener am I?

Randy was one of the most successful and recognized disabled athletes in the world. Not in one sport but three! He held records in wheelchair basketball, tennis and track. The memorial was filled with coaches, teammates and competitors talking about his mean serve, his strength and the many records he set. All that led him to him being the first Paralympian to be inducted into the U.S. Olympic Hall of Fame. 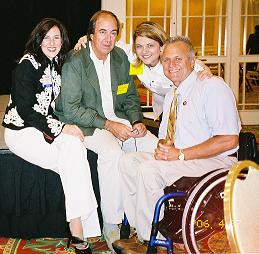 Yesterday, I attended a Memorial Service for Randy in Terrell. When I arrived at the memorial, the first person I saw was Mike Schlappi. Mike is another speaker who is also in a wheelchair and also a wheelchair athlete. He had come from Salt Lake City to pay his respects. Mike laughed and said, “Randy was always reinventing himself—I never knew what to expect”. That comment really made more sense as I sat and watched the slide show….short hair, mullet, beard, blond highlight, dark hair, long silver hair…Jane Pauly’s changing hairstyles had nothing on Randy Snow!

Randy’s motto was NO EXCUSES which he sometime spelled NOXQ’S . It was perfect for him. His accident occurred when he was 16. At the time, he was nationally ranked junior tennis player. He was crushed by a hay bale as he worked on a farm. The injury left him paralyzed from the waist down. What could have been the “end” of an active life was actually a “beginning”.
Stephen Covey has that great concept about starting with the end in mind. As I sat in Randy Snow’s memorial and I heard countless tales of how much fun he had, his kindness, how much he loved life…skydiving, scuba diving, parasailing, traveling and sports; as I looked at the photos and kept seeing that smile…..the one that makes your eyes twinkle…..and as people talked about how Randy “engaged’ in relationships…..I was reminded that that is how I want to live my life.

Godspeed, Randy. You will be missed. 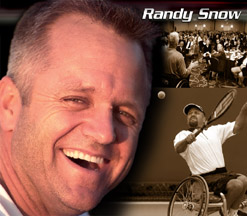