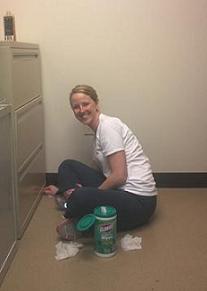 We had a long list of items that had to occur and there was a solid “go live” date just like with an event. Every task was detailed. Each task had a person’s initials indicating their overall responsibility. We had meetings twice a week to review our progress. The core team on the move was made up of three GDA people and lots of important outside team members: our interior designer, our furniture supplier, the cable guy, our IT guy, the building manager and the general contractor.

I think one of the most important touch points along the way was our December 5th staff meeting. We reviewed the timeline. I said, “ If you name is not on here, focus on what you do so those involved in the move can focus on the move.” So Julie sold, Lindsey made sure all logistics for January were in handled with great detail and Kim kept all the sales activity on track.

The result? Record December numbers. December was our second busiest month in 2012. We closed four major deals between Christmas and New Years!

The flexibility demonstrated by my team was unbelievable. As soon as the furniture was listed on Craig’s List we started selling furniture. By the last days, we had no desks. Everyone was so excited about the move they just rolled with it.

I learned something very valuable about my team. They love incentives. On Tuesday, December 27, I said if we are finished on Thursday evening, you can have Friday off. They kicked into high gear. We met the deadline.

Then I saw their true dedication. They had earned the day off, but at 8:30 a.m. Sarah Leverett showed up saying she could not stand it. She had to see what was going on. By 10 a.m. Ashley showed up and stayed until after 7 p.m. Theresa was on the phone all day resolving final details and Kim agreed to cover the phones.

We laughed, we reminisced, we tossed old files. We got excited about how to organize the new space. We were a strong team before. We are stronger now. Look out 2012 … Here we come!