In addition to blindness, Rex was born with an array of other issues so extreme it looked as though he might never walk or talk. Specialists were soon saying he was autistic.

Tom told me 60 Minutes was doing a profile on Rex and Cathleen. He thought I should talk to Cathleen.

It reminded me of the moments before I spoke to Nando Parrado. It was a story too compelling not to be told. 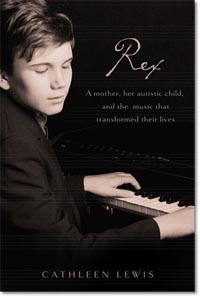 After getting to know Cathleen, I began to arrange speaking engagements for them on a very limited basis. Cathleen is very committed to ensuring Rex has a normal routine so she typically limits their talks to one per month.

Initially, I knew their story was so special I felt I had to find just the right audience. I selected my client YPO (Young Presidents' Organization). YPO is a client who wants new and fresh ideas that are not over exposed. I felt this was a perfect organization for their debut.

Just as I was working towards their debut for YPO, I ran into a problem with one of my established speakers. The speaker was on hold for an event in Japan. There was a scheduling problem and he was no longer available for the date.

Together, Cathleen and I decided to take the leap … she and Rex would make their speaking debut earlier than expected. The end client was Nikken and there were 2,500 people in the audience. It was a huge success.

In 2008, they did six events, including three for YPO who also awarded Cathleen and Rex their 2007 “Best of the Best” Award for presentations.

As you can tell, 2008 has been a very exciting year. Cathleen signed a contract with Thomas Nelson Publishers and authored her book. It will be released this week. I have seen a copy and it is beautiful. 60 Minutes is planning their third feature story on Rex set to air on November 16. Lesley Stahl attended the event in Lake Tahoe as part of the feature.

Oh yes, Tahoe … that is how I started this blog.

I have a former client and friend named Elyse who moved to Incline Village, Nevada where she continues as a professional volunteer. She is Vice Chair of the Children's Cabinet at Incline Village where she is bringing to life her incredible vision to create speakers series to benefit the organization. This year was the second event featuring Cathleen and Rex.

I flew to Lake Tahoe on Saturday morning.

When I saw Rex I was stunned. The last time I saw him in person was almost one year ago. He was taller, more mature, more sure of himself. We had an event on Saturday evening for the top donors. Rex performed. The hard to impress crowd was dazzled.  Sunday was the keynote presentation. Cathleen shared their story, which is inspirational.