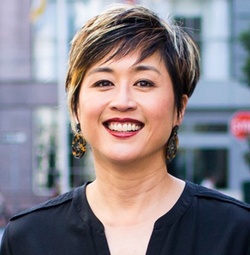 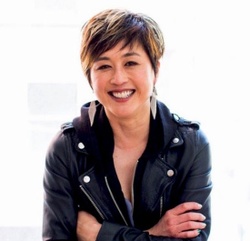 Jenn Lim is the CEO and Chief Happiness Officer of Delivering Happiness, a company she and Tony Hsieh (CEO of Zappos.com) co-founded to inspire science-based happiness, passion and purpose at work, home and everyday life. In Jenn’s words: “A CHO is doing what any CEO does in an organization — putting the people/resources/financing in place to create a sustainable company. The difference between a CEO and a CHO is that a CHO is doing it through the lens of happiness as a business model.”

Along with her “fearless leader” CHO responsibilities, Jenn manages a demanding speaking schedule that sends her around the world to deliver a message of passion, purpose, culture, and happiness. If you ask her, Jenn will tell you she never imagined the opportunities that she has today, but she often recalls a particular turning point in her life, which foreshadowed her path. While studying at UC Berkeley, she mistakingly walked into a poetry class and was expected to read her poems aloud. Another student came up to her after class and said “I loved that line.” It was in that moment that Jenn realized that words have power, and became the reason that she focuses so much energy on her speaking engagements today. She says: “If I affect someone in some way it’s worth it… somehow I ended up in this place where I have a bigger platform to do it now but it comes back to the same thing — to inspire and be inspired.”

Jenn was a consultant with Zappos from 2003-2011, during the years it grew from a startup into a billion-dollar business. She created the first (of several) Zappos Culture Books, an embodiment of how companies can use company culture as a way to increase productivity and profitability. Jenn’s experience with Zappos, combined with her development of scientific frameworks for workplace happiness, created the evidence that happier employees = happier customers = successful companies (and meaningful lives). What’s more, she discovered that every organization can have similar results.

In 2010, Jenn led the launch and management of Tony’s book (Delivering Happiness) which has sold almost a million copies worldwide and hit #1 on bestsellers lists like the New York Times, Amazon and USA Today. It was voted one of the best business books by NPR, Inc. Magazine and the Wall Street Journal, remained on the New York Times list for 27 weeks and has been translated into 20 languages.

DH has evolved from a book to a company and global movement represented by over 110 countries. Today, she’s dedicated to growing DH to inspire happiness in people, communities and companies so that together, we can create a happier world.

Has a self-proclaimed PhD in parallel parking.

She cooks once a year (average calculated since birth).