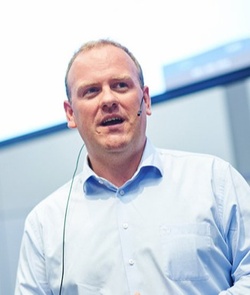 Steven Van Belleghem (pronounced Van Belly-gun) is an expert in customer focus in a digital world. He is a popular international keynote speaker. In his keynote presentations, Steven takes his audience on a journey to the world of modern customer relationships in a clever, enthusiastic and inspiring way.

Steven is the author of four bestselling books. He became known for his first book, The Conversation Manager, which won the award for most innovative marketing book of 2010. Steven also wrote The Conversation Company, When Digital Becomes Human (best marketing book of 2015) and his most recent book, Customers The Day After Tomorrow. Over 120,000 copies of his books were sold and they are published in 7 languages. Customers the day after tomorrow is nominated for the award of best international business book.

Steven is also an entrepreneur. He is a co-founder of consultancy firm Nexxworks and the co-founder of content creation company Snackbytes. Steven is investor in the AI start-up Hello Customer and the fast growing digital agency Intracto. He spent the first 12 years of his career as a consultant and managing partner of the innovative market research company InSites Consulting. During that time, the company grew from 8 to 130 staff with offices in 5 countries. Steven is also a part-time marketing professor at Vlerick Business School. Finally, Steven is a board member of Plan International.

Steven studied applied economics at the University of Ghent. His summers were spent specializing in marketing at UC Berkeley. Even after all these years, Steven is still in love with San Francisco and beautiful California.

Steven started his professional career as a research assistant at the Vlerick Business School, where he remains a guest marketing professor to this day.

In 2001, Steven was one of the first employees to join InSites Consulting, a start-up in the online research industry. Over time he worked his way up to become one of the company’s managing partners and shareholders. Steven spent a total of eleven and a half years at InSites Consulting. During this period, the company grew from just 8 staff to 130 with branches in 5 countries. It was an amazing adventure.
In 2012, Steven started his own inspiration company called B-Conversational. He runs the company with his wife, business partner and best friend Evi and together, they inspire companies around the world.

In 2014 Steven started 2 new companies. He is a co-founder of inspiration firm Nexxworks and the co-founder of content creation company Snackbytes. Next to that, he is investor in Hello Customer And Intracto Group. Finally, he is a board member of Plan International.

Steven also teaching as a Professor of Marketing in at the University of Belgium.