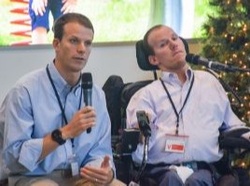 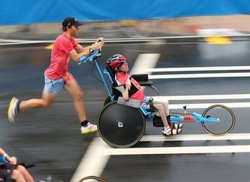 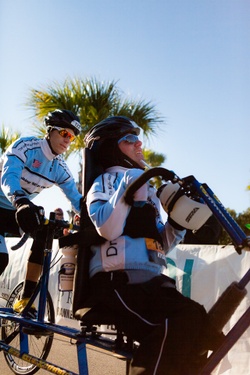 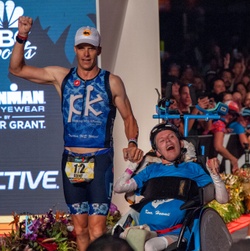 Diagnosed with Spastic Quadriplegic Cerebral Palsy as a child, Kyle Pease had grown up supporting his athlete brothers Brent and Evan from the sidelines. While his condition limited his ability to play sports, it didn't dampen Kyle's passion for them, nor did it stop the Pease family from including Kyle in everything. Neither he nor his family treated his disability like a tragedy, and instead used it to fuel his dreams and spirit; from rolling his wheelchair up Bridal Veil Falls in Yosemite National Park to zipping down snow-covered Colorado slopes, there was never a dull moment with the Pease family. Where there was a wheel, there was a way - to adventure!

Upon witnessing Brent complete his first IRONMAN competition, Kyle asked Brent a life-changing question: 'Can people in wheelchairs do IRONMAN?' Brent never hesitated with his response; the answer was a resounding 'YES!'

Who would ever have imagined that a man who has never taken a step under his own power would be blessed with the opportunity to compete in a sport that is defined as 'three-part sports discipline comprising swimming, cycling, and running' You've never met Kyle Pease (or a Pease brother) then!

Starting from scratch with no running chair, learning from others, and through trial and error and a ton of hard work, Kyle and Brent Pease have since completed more than 75 races together, including four IRONMAN triathlons and countless other endurance races. Finally, after years of hearing 'NO' from their KONA applications, they were awarded the opportunity to participate in the 2018 IRONMAN World Championships in Kona, Hawaii. This is historic, as they are the first ever set of brothers and the second ever 'push-assist team' to compete in the iconic KONA triathlon.

Brent and Kyle speak to audiences across the nation, sharing their message of inclusion and define what is truly possible. Their presentations interweave both their perspectives of PEASY life and their KONA quest, and Kyle and Brent recount the experiences that shaped the undying bond that has resonated between them since childhood; through their strength and tenacity audiences are inspired to stand up, face their own challenges and embrace change. Their motivational message and humble style can show audiences ways to continually challenge themselves and build the life they dream of.

As well as being avid racers, they also founded and manage The Kyle Pease Foundation; for many years the foundation has empowered athletes with disabilities to compete in the multi-sport and endurance world, and promotes success for young persons with disabilities by providing assistance to meet their individual needs through sports and competition. Since its inception, it has championed more than 100 athletes across 60 events and has multiple programs including grant and scholarship opportunities, assistance purchasing adaptive sports equipment, and participation in educational campaigns.