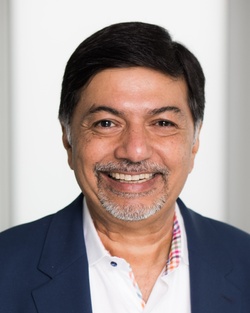 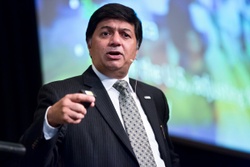 Raj was born in India and spent parts of his childhood in Barbados, California, and Canada. He was educated as an electrical engineer from the Birla Institute of Technology and Science (BITS, Pilani). He received an MBA in Marketing from the Jamnalal Bajaj Institute of Management Studies in Mumbai after which he earned a Ph.D. in Marketing and Business Policy from Columbia University.

He also spent 15 years at Bentley University as Trustee Professor of Marketing, Department Chair and founder/director of the Center for Marketing Technology. Raj is a trustee of Conscious Capitalism Inc. and a member of the board of directors of The Container Store. He has consulted with and taught executive programs for numerous companies, including AT&T, Nokia, LG, DPDHL, POSCO, Kraft Foods, Whole Foods Market, Tata, Siemens, Sprint, Volvo, IBM, Walmart, Rabobank, McDonalds and Southern California Edison. Raj is an American citizen residing in Boston, Massachusetts.

Raj has published fifteen books (including The Healing Organization, Conscious Capitalism, Firms of Endearment, The Rule of Three, Everybody Matters) and over 100 academic articles. His work has been featured in the Wall Street journal, The New York Times, Fortune, Financial Times, The Washington Post, The Boston Globe, CNBC and many other media outlets.

In 2003, Raj was cited as one of “50 Leading Marketing Thinkers” and named to the “Guru Gallery” by the Chartered Institute of Marketing. Bentley University honored him with the Award for Excellence in Scholarship in 2007 and the Innovation in Teaching Award in 2008. He was named one of “Ten Outstanding Trailblazers of 2010” by Good Business International, and one of the “Top 100 Thought Leaders in Trustworthy Business Behavior” by Trust Across America for 2010 and 2011. In 2013 and 2015, Raj was named to the Thinkers 50 list of business and management thinkers from India. Raj received an honorary doctorate from Johnson & Wales University in 2016 and the Business Luminary Award from Halcyon in 2021.

Raj served on the Board of Directors of The Container Store and Mastek Ltd. He is a Trustee of Conscious Capitalism Inc. He is on the Advisory Board of several organizations, including the Fowler Center for Business as an Agent of World Benefit, ecountabl, Decency Global and PayActiv.