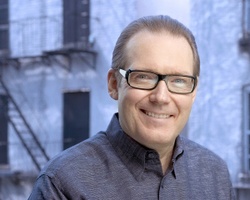 Michael Rogers is an author and futurist, who also serves as futurist-in-residence for The New York Times. His consultancy, Practical Futurist, has worked with companies ranging from FedEx and NBC Universal to GE and Microsoft.

Rogers was a writer for Rolling Stone and co-founded Outside magazine. He then launched Newsweek’s technology column and was vice president of The Washington Post Company's new media division, earning patents for his work as well as awards for his online coverage of 9/11. He is also a best-selling novelist whose books have been published worldwide.

Rogers studied physics and creative writing at Stanford University, with additional work at the Stanford Business School Executive Program. Michael’s most recent book, Email from the Future: Notes from 2084 was published this year on Earth Day.