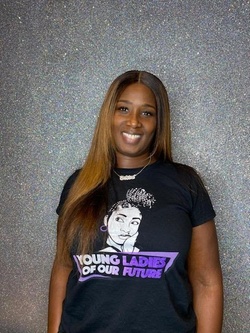 Retired NYPD Detective Katrina Brownlee is a sought-after speaker regarding her triumph over domestic violence and her story has been profiled many places including The NY Times and CBS 48 Hours. Detective Brownlee heroically turned adversity into advantage and found her voice to tell her story after the stigma of domestic violence almost left her dead.

When Katrina was 22 years old, she was shot 10 times in a violent domestic relationship with her ex-fiancé that worked in law enforcement. The attempted murder on her life left her paralyzed and several surgeries later she had to relearn to walk. She calls it the "blue wall of silence." Each time she called 911 after he beat her, she says the police walked away after seeing his shield.

After this life altering traumatic experience took place, her challenges didn’t end, and she and her children became homeless. Katrina triumphed and overcame this and many other obstacles of her troubled past and went on to attend the College of New Rochelle.

She made the decision to join the New York City Police Department (NYPD) after her cries went unanswered for so long and she wanted to help others. 24-years later she retired as the highest ranking first grade detective in the largest police force in the country and she was on the Mayor of New York’s security detail team. Today she speaks to communities and institutions about the need for domestic violence resources and how to identify them.

Detective Brownlee has received many accolades for her mentorship work as the founder of Young Ladies of Our Future, a 501(c)(3) non-profit organization for at-risk young women. The organization's mission is to heal the wounds of interpersonal violence, build self-esteem, and promote health and wellness so young ladies can achieve their goals and live successful lives.

Detective Brownlee recently wrote her memoir, “And Then Came The Blues.”