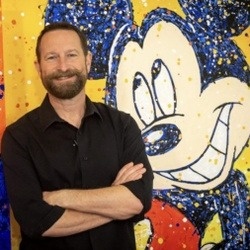 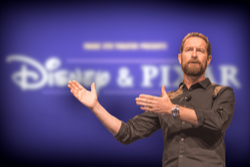 Duncan Wardle Former Head of Innovation and Creativity at Disney

The former Vice President of Innovation & Creativity at The Walt Disney Company, Duncan Wardle spent his 25-year career at Disney developing some of their most innovative ideas and strategies. Ideas that would forever change the way the company expands its impact, trains its employees, and solves problems creatively.

What sort of ideas? How about sending a beloved Pixar character into outer space?

When tasked with developing a creative public relations campaign to launch Walt Disney World’s newest attraction, Toy Story Mania, Duncan made a deal to send the one and only Buzz Lightyear up on NASA’s Space Shuttle Discovery, where he took part in the live broadcasts Astronauts beamed back to earth. It was the ultimate in creative cross-promotion, and forever gave Duncan bragging rights, having launched a PR campaign that was literally out of this world!

Back on Earth, Duncan and his team were tasked with leading the Walt Disney creative process for LucasFilms, Pixar, Marvel, Disney Imagineering, Disney Parks and ESPN. Realizing that innovation and creativity were not inherent traits, but something that could be taught and learned, Duncan founded the Creative Catalyst Team. This team was used to teach employees across all the Disney properties how to develop their own “thinking toolkit,” which would enable them to strategically and repeatedly create moments of innovation within their business units.

The program was a massive success, and during Duncan’s tenure, the group trained over 3,000 professional and executive Disney cast members. Participants walked away from Duncan’s program with the ability to think more audaciously when solving challenges and create innovative new storylines, products and services throughout the entire Disney universe.

While Duncan loved the challenge of running the creativity and innovation teams at the world’s most creative company, he understood that his ability to successfully teach others to develop an innovation and ideation toolkit was something that could have a massive impact for people and organizations across the globe. And so, he left to launch his creative consulting company id8, which has quickly become one of the top innovation consulting firms in the world, and in the process, has allowed Duncan to share his creative consultant services and innovation workshops to thousands of employees and executives at companies such as Ford, McKinsey, Coca-Cola, NBA, Apple, Johnson & Johnson and Forbes.

With an infectious energy and playful collaboration, Duncan pushes executives and their teams to overcome preconceived ideas, act more audaciously, and develop their own innovation “light switch”, which is a method to activate their creative brain and access the ideas that turn ordinary companies into industry leaders.