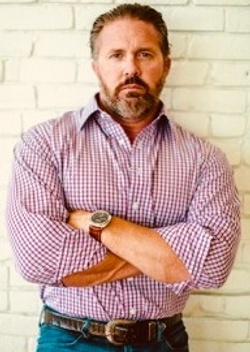 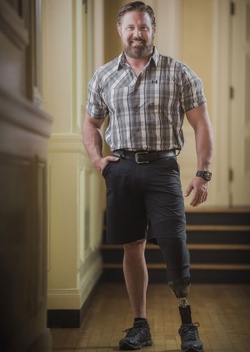 Captain Fleming has been deployed overseas six times with the U.S. Army’s elite 75th Ranger Regiment in support of both Operation Enduring Freedom and Operation Iraqi Freedom. He has been wounded in combat on three separate occasions and has undergone 23 surgeries, one of which resulted in a trans-tibial amputation of his left leg. While most would assume this type of injury would conclude someone’s service to their country. Captain Fleming has re-deployed five times since his injuries, each time going right back into the fight. He is one of the few amputees who have been able to redeploy into combat as an amputee.

After serving with distinction and receiving numerous awards and decorations, including the Meritorious Service Medal, two Bronze Star medals with Valor, and three Purple Hearts, he retired from active duty and still serves our country in other capacities.

He has completed marathons, triathlons, tough mudders and cycling events throughout the United States and is also a sought after inspirational speaker. Numerous Fortune 500 companies have asked Chad to bring his message of resilience, perseverance, and his “Never Quit” attitude into their companies to help build their corporate teams. He is a Board Member for the “Lone Survivor Foundation,” and travels around the country as part of Marcus Luttrell’s Patriot Tour.

He was a vital part of the 2010 Olympic Hockey team’s run for the Gold Medal. Captain Fleming has spoken to both college and professional sports teams, and he is the spokesman for Under Armour’s “UA Freedom” initiative, a corporate initiative that raises money and awareness for our nations wounded veterans.