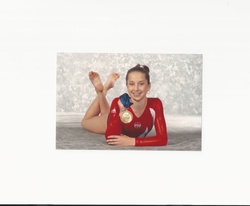 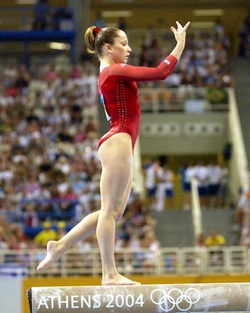 Carly's performance at the Olympics made her a household name, leading to numerous appearances on television talk shows and award shows, and her induction to the USA Gymnastics Hall of Fame.

Soon after the Olympics, Patterson was diagnosed with several bulging discs in her lower back that had gone unnoticed. She announced her intention to take time off from the sport to rehabilitate her back, but hearing her doctor say 'Carly, you really need to stop if you want to be able to walk when you get older', she made the difficult decision to officially retire from the sport in 2006 - without ever participating in another major competition.

Later that year, Carly released her co-written her autobiography, Be Strong, revealing the strength and perseverance that helped her win Olympic gold.

On the heels of her legendary achievements at the 2004 Olympic games, and never one to shy away from a challenge, Carly aggressively pursued a career in vocal performance, songwriting and production - complete with high-level recording contracts, movie appearances, and regular rotation of her songs on radio and television.

In 2012, Carly married the love of her life, and over the years that followed, her resilience would be put to the test again as she and her husband navigated the dark trail of infertility, a path that one in every eight couples is forced to travel.

"This body that had achieved a gold medal at the Olympics, you know, one of the toughest things you can ever do, was at this point, failing me and that was difficult.”

Her achievements as a gymnast and the opportunities she pursued after retiring gave Carly a unique perspective on embracing true success, find lasting fulfillment, and addressing the question: what do you do when your greatest accomplishment is behind you?

In her authentic, humorous, and down-to-earth presentations, Carly shares the redefinition of success through principles she learned as a championship-level gymnast - and in the challenging years that followed.

Carly continues to be an inspiration by sharing her story of resiliency, fearlessness, dedication, and hard work.