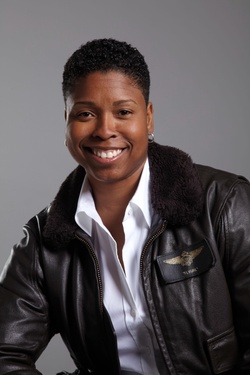 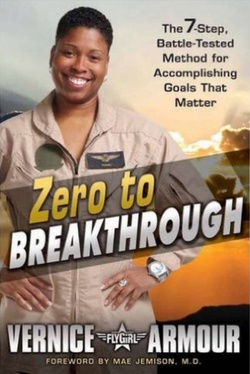 Combat tests you. Being a beat cop tests you. Life tests you. Three brothers and being the only girl...tests you. Vernice “FlyGirl” Armour has been tested her whole life. A gutsy trailblazer, her resume is an impressive collection of “firsts” including America’s first Black female combat pilot. She served two tours of duty in Iraq as a Marine. She was also a diversity liaison officer to the Pentagon for Headquarters Marine Corps. After her military service, FlyGirl revved up her career in the private sector as an entrepreneur, consultant to business, and author of Zero to Breakthrough, The 7-Step, Battle-Tested Method for Accomplishing Goals that Matter. As a speaker, FlyGirl unleashes hard-hitting advice and amazing anecdotes from her adventures on the battlefield and in business. She helps individuals and organizations Get Gutsy and build a sustainable inner force and conviction, that results in accomplishing significant goals.

In 2007, FlyGirl launched VAI Consulting & Training, LLC. Through that work, she helps individuals and organizations make gutsy moves and create breakthrough results by applying her “Zero to BreakthroughTM” Success Model – a mindset that helped to propel her career and kept her safe in air combat. FlyGirl regularly takes her message to premier meetings and conferences worldwide and is a Gutsy Confidence Mentor for elite senior executive Women in Tech.

As a Black gay woman and single mom, FlyGirl brings vital experience to her role as a member of the Forbes School of Business & Technology Board of Advisors and COMCAST/NBCUniversal Joint Diversity Council.

FlyGirl has two honorary doctorates and has received numerous awards as a pioneering pilot, including honors for her commanding role in Science, Technology, Engineering and Mathematics (STEM).

Vernice “FlyGirl” Armour’s story has been featured in the media including on CNN, MSNBC, The View, FOX News, Oprah Winfrey and many more, along with being a running back for the San Diego Sunfire professional women’s football team and two-time title holder of Camp Pendleton’s Strongest Warrior Competition.

She is currently working on her next book, The Gutsy Move.

How did it all start? Vernice was born in Chicago, IL in 1973, and moved to Memphis, TN after her parents divorced when she was three. By the age of four, she knew she wanted to be a police officer that rode a horse downtown. She received her first pony as a gift on the Christmas day following her fourth birthday and her dream quickly started to have a foundation in reality. In 1991, she graduated from John Overton High School for Creative and Performing Arts where she was very active in the music program, class vice president, a member of Mu Alpha Theta (mathematics honor society), and The National Honor Society.

In 1993, the future combat pilot enlisted in the Army Reserves and joined the Army ROTC program while at Middle Tennessee State University. During an Army ROTC career day, the seed of becoming a pilot was planted when Vernice saw the image of a young Black female in an Army flight suit. “Now why didn’t I think of that!” was her first thought!

In June of 1996, after a brief stint as a Nashville Sheriff’s Department correctional officer, Vernice took a break from college to accept an invitation to the Nashville Police Academy. She graduated in December 1996 – and later became the first woman of color on the Nashville Police Department’s motorcycle squad. She graduated from MTSU in December of 1997 with her B.S. in Physical Education: Emphasis in Exercise Science.

With the aviation seed in full bloom, Vernice was commissioned as a Second Lieutenant in the Marine Corps on December 12, 1998 and on her way to flight school. When Vernice finally earned her wings in July 2001, the ambitious pilot ranked No. 1 out of both her class of 12 and of the last 200 to graduate. She made the Naval Air Station’s prestigious Commodore’s List, received the Academic Achievement Award, was the top graduate in her class, and went on to make history as the Marine Corps’ first African American female pilot.

After flight school, Vernice was stationed at Marine Corps Base Camp Pendleton near San Diego, CA, piloting the AH-1W Super Cobra attack helicopter. While there she was Camp Pendleton's “Female Athlete of the Year” and two-time titleholder in their “Strongest Warrior” Competition.

Deployed as part of Operation Iraqi Freedom in 2003, Vernice was recognized by the Department of Defense as America’s first African American female combat pilot. Vernice flew above the deserts of Iraq in her missile-equipped attack helicopter, engaging the enemy and scouting the roads from her cockpit, making sure they were safe for her fellow Marines and soldiers on the ground.

Upon leaving the military after the completion of two tours in Iraq, Vernice launched VAI Consulting and Training, LLC. She now resides in Atlanta, GA with her daughter Noah...her gutsiest move yet.

Important Note: FlyGirl was a combat pilot, not a fighter pilot, and she served in Iraq, not Afghanistan.