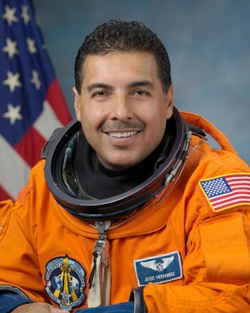 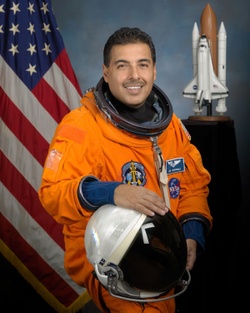 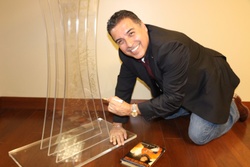 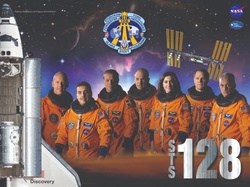 José was selected by NASA as a member of their 19th class of astronauts in 2004. After completing his training he was selected for a mission in 2007 and flew as the flight engineer in the 2009 14-day STS-128 mission aboard Space Shuttle Discovery to the International Space Station. In addition to his flight engineer duties José was also one of two principal robotic arm. Before being selected as an astronaut, José worked at NASA as the Branch Chief of the Materials and Processes Branch at the Johnson Space Center in Houston, Texas. There he oversaw the branch’s activities in the areas of materials and processes, fracture control, nondestructive evaluation, failure analysis, and Nano materials research. His branch was also instrumental in
participating in the investigation to help find the root cause of the Space Shuttle Columbia accident and reporting those results to the President’s Columbia Accident Investigation Board.

Prior to this, José spent more than 15 years at Lawrence Livermore National Laboratory (LLNL) where he worked on the development of a space deployed X-Ray laser as part of the Strategic Defense Initiative. He then went on to co-develop the first full-field digital mammography system for the earlier detection of breast cancer thus opening a new area of research called computer-aided diagnosis and was recognized by both the U.S. Department of Energy (DOE) for this important contribution. He was also the Deputy Program Manager of the Highly Enriched Uranium Implementation program where his team was in charge of implementing a signed bilateral agreement between the U.S. and Russian Federation for the U.S. purchase of highly enriched uranium (HEU) in the form of low enriched uranium (LEU) derived from the dismantlement of Russian nuclear weapons. Finally José was invited to Department of Energy Headquarters in Washington DC to serve as the Laboratory’s Program Manager in the Office of International Material Protection and Cooperation. Here he managed, integrated and allocated Department of Energy assets and expertise, including the national laboratories and contractors, in planning, directing, and implementing U.S. cooperation with the Russian Federation in the program of Nuclear Materials, Protection, Control and Accounting (MPC&A). Jose developed and implemented policies, strategies and plans to enhance U.S. national security and reduce threat of nuclear proliferation and nuclear terrorism. These goals were accomplished by rapidly improving the security of large quantities of attractive, weapons-usable nuclear material in Russia’s nuclear weapons complex.

After Jose’s 2009 Space Mission José was assigned to work at NASA Headquarters in Washington D.C. where he served as a Legislative Analyst and helped in the development of space policy, NASA’s annual budget package and served as liaison with key Congressional members. Additional duties included the development of an effective strategy that promoted the President’s new vision on Space Exploration. José is a former candidate for U.S. Congress, author of several books including his autobiography “Reaching for the Stars” and the children’s version “The Boy Who Touched the Stars”.

Today, José works as a consultant within the company he founded in 2012, Tierra Luna Engineering, LLC. Here, he works on his areas of interest that include aerospace consulting, renewable energy, and Science, Technology, Engineering, and Math (STEM) outreach. Projects he has worked on include serving as the technical liaison to Mexico’s Secretaria de Comunicaciones y Transportes (SCT) where he helped develop the technical requirements to procure three communications satellites from Boeing. In this role he assisted in the procurement and the acceptance testing process. He also ensured the launch and orbit placement of the three satellites with three different launch service providers. Current activities include serving as a visiting professor at the Universidad Autonoma del Estado de Puebla (UPAEP) in Puebla, Mexico where he is mentoring UPAEP faculty and students and through a Space Act Agreement with NASA and the Mexican Space Agency, will assist UPAEP in the design, testing and launch of the first functioning satellite designed and built by a university in Mexico. The scheduled launch date is October 2019 aboard a Falcon 9 rocket as part of a Nanoracks payload.