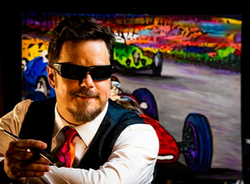 After losing his sight in 2001, John decided to pick up a paint brush. He never expected anyone to see any of his
paintings; he just knew he needed to reconnect with the visual world he had lost.

Since then John’s work has been featured in major news outlets and traveled the world. He has worked with celebrities such as Tony Hawk, Jeff Bridges and Lyle Lovett, among others. In 2017 John partnered with Delta to painted a Boeing
737 promoting the Rock-in-Rio concert. John has received three presidential service awards for his innovative multi-sensory art workshops and been named a Cultural Ambassador to the US.

Not only is John ranked as the #1 blind painter in the world, he is now the only blind muralist having completed projects in New York, Dallas and Fort Worth. John has shared his story with audiences around the world for the past ten years, energizing organizations and motivating people to exceed their limits. John’s unique journey from the dark has enabled him to connect with a visual world and act as a beacon for others experiencing struggles.

John’s motivational talks celebrate diversity and overcoming obstacles in an engaging and entertaining way. His theme centers around turning negatives into positives and creating solutions while fostering a more inclusive environment where everyone can flourish and be heard.