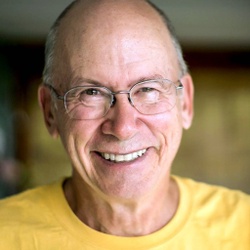 One of America's Top Professional Photographers

Dewitt Jones is one of America's top professional photographers with a career stretching over twenty years. As a motion picture director, he had two films nominated for Academy Awards (Climb - Best Live Action Short Film and John Muir's High Sierra - Best Short Subject Documentary) before he was thirty.

Twenty years as a freelance photographer for National Geographic earned him a reputation as a world-class photojournalist.

He has published nine books, including California!, Visions of Wilderness, What The Road Passes By, Robert Frost; A Tribute To The Source, Canyon Country and John Muir’s High Sierra. His most recent book, The Nature of Leadership was created in collaboration with Stephen R. Covey (The Seven Habits of Highly Effective People). Dewitt's column, Basic Jones, appears monthly in Outdoor Photographer magazine.

Dewitt is recognized as a world-class lecturer. His knowledge of the creative process, his relaxed and genuine style and his ability to communicate make his presentations truly outstanding.

Dewitt Jones is one of America's top professional photographers.

Twenty years as a freelancer for National Geographic, shooting stories

all over the globe, has earned him a reputation as world-class

As a motion picture director, he had two documentary films

nominated for Academy Awards before he was thirty. His work is well

known to the corporate world as well, in advertising campaigns for

And Dewitt is well known here in the islands. He is a resident of

Molokai, an island with a population of just seven thousand which lies

but a few miles across the channel.

Today Dewitt will share with us both his creativity and his aloha.

and, through the lessons he has learned here in Hawaii, he will open

our hearts as well.