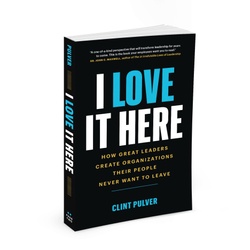 A Professional Drummer for over 20 years, he’s played with top headlining fellow musicians in venues like the Vivint Arena, the Stadium of Fire, and the Kodak Theater in Hollywood. He founded the UVU Drumline known as the Green Man Group, which he directed for six years and went on to direct the Drumline for the NBA’s Utah Jazz until 2015.

In September 2020, The Rocky Mountain Emmy Awards, a division of the National Academy of Television Arts and Sciences, awarded Clint his very own golden statue for storyboarding, casting and directing the video Clint Pulver: You're Not a Problem. He's also appeared on America's Got Talent and in feature films with Jack Black (School of Rock) and John Heder (Napoleon Dynamite). Business Q Magazine featured Clint as one of their "Top 40 Under 40" as a premiere Corporate Keynote Speaker.

Known as the Leading Authority on Retention, Clint helps organizations retain, engage, and inspire their team members from the front desk to the board rooms and everyone in between. He expertly helps audiences navigate generational complexities, communication challenges, leadership missteps, and culture cues.

As the president and founder of The Center for Retention, Clint has transformed how corporations like Keller Williams, AT&T, and Hewlett Packard create lasting loyalty through his work and research as “The Undercover Millennial”. For over a decade, he has been a self-motivated Entrepreneur who is well versed in business start-up, leadership, sales management, management training, and helping teams grow multi-million-dollar accounts. He uses that experience to create teachable relationship and business strategies based on trust, service, support, connection, and consistent follow-through.

Clint strongly believes that a single moment in time can change a person’s life. He has traveled the world speaking to a wide spectrum of diverse audiences, challenging them to dream, excel, connect, and believe--both in themselves and in the power of others. For over a decade, Clint has dedicated his heart to helping organizations understand the younger generation and helping the younger generation better understand themselves by living a life of significance, rather than just a life of success. His mantra? “It’s not about being the best in the world…it's about being the best FOR the world.”