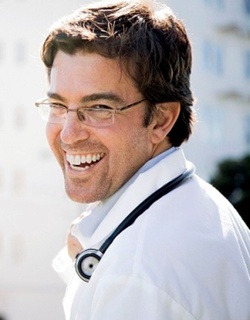 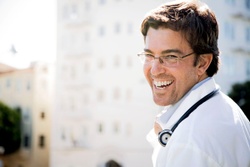 If he’s not already, Brad Nieder, MD, CSP*, will soon be on your list of favorite doctors. And unlike some of those mentioned above, he’s actually a real physician! He’s also a funny motivational keynote speaker and master of ceremonies. Yes, Dr. Brad–“The Healthy Humorist®”–is unlike any other doctor you’ve encountered.

Described as “Jerry Seinfeld with an ‘MD,’” the funny doctor was infected with the comedy bug while watching Johnny Carson’s “Tonight Show” monologues from the foot of his parents’ bed. When he got older and stayed up a bit later, he discovered David Letterman’s “Late Night” antics. He taped and memorized George Carlin’s HBO specials. He wrote funny articles for his Denver high school newspaper. He was a founding member of an improvisational troupe (The Simps) while an undergraduate student at Stanford University. And he performed clean standup comedy throughout Denver while he was in medical school at the University of Colorado.

After completing his internship and getting his medical license, the funny speaker began delivering his unique brand of Healthy Humor around the country to corporate audiences, convention crowds and conference attendees. Physicians, nurses, bankers, teachers—indeed people from all industries—have benefited from the comedian doctor’s house calls. It’s an unusual medical practice, but when Dr. Brad dispenses humor, inspiration and education, it just may be the best preventive medicine available!

Dr. Brad has been a professional keynote speaker for nearly 20 years. He earned the Certified Speaking Professional (CSP) designation in 2011 and is simply one of the best conference speakers and clean comedians in the meetings industry today.

When he’s traveling the country, Dr. Brad likes to indulge in “The Healthy Humorist®’s Unhealthy Eating Adventure Across America” (#THHUEAAA), in which he consumes such fare as Italian beef in Chicago, BBQ in Austin and ice cream in Columbus. (Yes, he agrees it’s weird that central Ohio has such an abundance of great frozen treats!) The health and wellness speaker eats healthier when he’s home in Colorado, where he likes to spend time with his lovely wife and three wonderful kids. He also tries to practice the healthy part of what he preaches by running, swimming, skiing and fly-fishing in the Rocky Mountain sunshine.