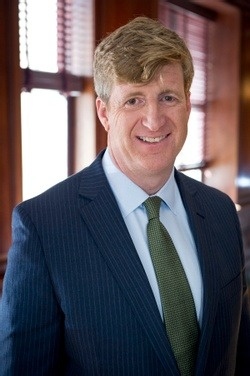 During his 16 years in the U.S. House of Representatives, serving Rhode Island’s First Congressional District, Patrick J. Kennedy fought to end discrimination against mental illness, addiction, and other brain diseases. He is best known as the lead sponsor of the groundbreaking Mental Health Parity and Addiction Equity Act, which was passed with bi-partisan support, and signed into law by President George W. Bush on October 3, 2008. The Federal Parity Law provides millions of Americans, previously denied care, with access to mental health and addiction treatment by requiring insurance companies to treat illnesses of the brain, such as depression and addiction, the same way they treat illnesses of the body, such as diabetes and cancer.

In addition to the Federal Parity Law, Kennedy authored and co-sponsored dozens of bills during his time in Congress to increase the understanding and treatment of neurological and psychiatric disorders, including the Positive Aging Act; Foundations for Learning Act; National Neurotechnology Initiative Act; Genomics and Personalized Medicine Act; COMBAT PTSD Act; Nurse-Family Partnership Act; Alzheimer’s Treatment and Caregiver Support Act; and Ready, Willing, and Able Act, which called on the Department of Homeland Security to deploy a civilian response system to blunt the psychological impact of terrorism. He served on various committees and subcommittees, including the House Appropriations Committee; the Subcommittee on Health, Education and Welfare; the Subcommittee on Labor, Health and Human Services, and Education; and the Subcommittee on Veterans Affairs.

After the death of his father, Senator Edward “Ted” Kennedy in 2011, Patrick J. Kennedy left Congress to devote his career to mental health advocacy and enforcement of the Federal Parity Law, pursue a healthier lifestyle, and start a family.

In 2013, he founded The Kennedy Forum, a non-profit organization whose mission is to lead a national dialogue on transforming mental health and addiction care delivery by uniting mental health advocates, business leaders, and government agencies around a common set of principles, including full implementation of the Federal Parity Law. Launched in celebration of the 50th anniversary of President Kennedy’s signing of the landmark Community Mental Health Act, the Forum aims to achieve health equity by advancing evidence-based practices, policies, and programming in mental health and substance use.

The Kennedy Forum’s collaborative partnerships help to foster greater provider accountability, integration, and coordination; cutting-edge technologies; and brain fitness and education. The non-profit organization publishes frequent issue briefs and is a repository of other educational resources on parity issues, such as Navigating the New Frontier of Mental Health and Addiction: a Guide for the 115th Congress—the first-ever guide for Members of Congress that pinpoints and defines tangible actions necessary for change; Parity Registry—a website where consumers can find guidance and register complaints against insurance companies after being wrongfully denied coverage for mental health or addiction treatment; and Parity Track—a website where legislators, policymakers, journalists, consumers, and others can track legislative, regulatory, and legal parity activities in all 50 states.

As co-founder of One Mind (formerly One Mind for Research), Kennedy helped spark a global revolution in how scientists collaborate to study, diagnose, and treat brain diseases. The organization pushes for greater global investment in brain research, which Kennedy has called “the next great frontier in medicine,” and is pioneering a worldwide approach that ensures scientific research, results, and data are available to researchers everywhere. Current initiatives are accelerating the discovery of better diagnostics, treatments, and cures for post-traumatic stress and traumatic brain injury. The next step will be to extend One Mind’s open science principles to increase the pace of cures and treatments for all brain diseases, including Alzheimer’s, Parkinson’s, ALS, addiction, and depression.

Inspired by his work in both organizations, but still facing the daily struggle to fight stigma, in 2015, Kennedy co-authored the New York Times Bestseller, “A Common Struggle: A Personal Journey Through the Past and Future of Mental Illness and Addiction.” The narrative details Kennedy’s personal struggles, as well as his bold plan for the future of mental health care in America. In breaking his family’s “code of silence,” Kennedy openly challenged the stigma and shame commonly surrounding families trying to cope with mental illness and/or addiction.

In the spring of 2017, Kennedy was appointed to serve on the President’s Commission on Combating Drug Addiction and the Opioid Crisis. The Commission, chaired by New Jersey Governor Chris Christie, studied ways to combat and treat the scourge of drug abuse and addiction in the U.S., ultimately delivering a final report of recommendations to President Donald Trump. Kennedy’s personal contributions focused on the declaration of a federal emergency. He also pushed the Commission to issue strong parity recommendations, which included asking Congress to give the Department of Labor authority to levy civil monetary penalties against health insurers and asking all regulators to use a standardized tool when performing parity compliance investigations.

Kennedy provides strategic guidance on mental health, intellectual disabilities, and public service by serving as a board member for many influential, cause-driven organizations, including: Best Buddies, the Depression and Bipolar Support Alliance (DBSA), the Edward M. Kennedy Institute, the International Bipolar Foundation, the Joseph P. Kennedy Jr. Foundation, and the National Action Alliance for Suicide Prevention.

Amid countless recognitions, meaningful partnerships, and political affiliations, Patrick J. Kennedy’s most important achievement continues to be leveraging his powerful family legacy in the arenas of civil rights, mental health, and intellectual disabilities to advance the cause of social justice and health equity for all people. He lives in New Jersey with his wife, Amy, and their five children.