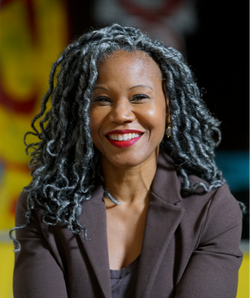 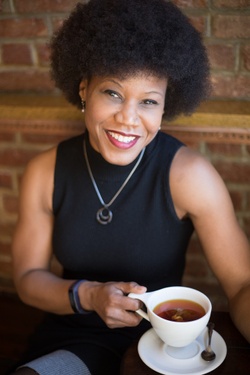 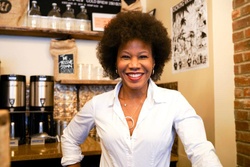 In 2017, she launched the Boogie Down Grind, a Hip Hop themed speciality coffee & craft beer spot, and the first commercial “3rd Space” in the Hunts Point section

of the South Bronx since the mid-1980s. This venture also provides a rare opportunity for local families to invest through SEC approved online investment platforms.

Majora is quoted on the walls of the Smithsonian Museum of African-American History and Culture in DC:

"Nobody should have to move out of their neighborhood to live in a better one”.

Her ability to shepherd projects through seemingly conflicted socio-economic currents has garnered her 8 honorary PhD's and awards such as: 100 Most Intriguing Entrepreneurs by Goldman Sachs, Silicon Alley 100 by Business Insider, Liberty Medal for Lifetime Achievement by News Corp, and other honors from the National Building Museum, International Interior Design Association, Center for American Progress, as well as her TEDtalk (one of six to launch that site in 2006).

She has served on the boards of the US Green Building Council, Ceres, The Wilderness Society, and the Andrew Goodman Foundation.

Majora was born, raised and continues to live in the South Bronx. She is a graduate of the Bronx High School of Science (1984), Wesleyan University (1988 BA, Distinguished Alum) and New York University (MFA). After establishing Sustainable South Bronx (2001) and Green For All (2007), among other organizations, she opened this private consulting firm (2008) - which was named Best for the World by B-Corp in 2014.

While at Sustainable South Bronx, Carter deployed MIT’s first ever Mobile Fab-Lab (digital fabrication laboratory) to the South Bronx - where it served as an early iteration of the “Maker-Spaces” found elsewhere today. The project drew residents and visitors together for guided and creative collaborations.

In addition, Majora Carter launched StartUp Box, a ground-breaking tech social enterprise that provided entry-level tech jobs in the South Bronx, operating it from 2014-2018. Majora Carter has helped connect tech industry pioneers such as Etsy, Gust, FreshDirect, Google, and Cisco to diverse communities at all levels.