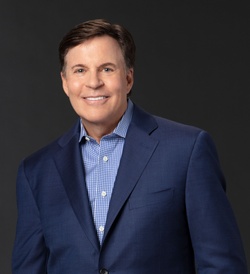 Bob Costas has won 29 Emmy awards – more than any sports broadcaster. His versatility has been recognized with awards and nominations in the categories of hosting, play-by-play, writing, journalism, interviewing, news, and entertainment. He is the only person ever to have won Emmy’s in news, sports, and entertainment. His news Emmy was awarded for his 2011 interview with Jerry Sandusky, the central figure in the Penn State scandal. His entertainment Emmy came in 1993 for his acclaimed late-night program “Later with Bob Costas.”

Bob’s peers have named him the “National Sportscaster of the Year” a record eight times, and in 2012, he was elected to the National Sportscasters and Sportswriters Hall of Fame. Also in 2012, Bob was selected for the Walter Cronkite Award for distinction in journalism. He and Al Michaels are the only sports broadcasters to be so honored.

In the summer of 2018, Bob was inducted into the broadcasters’ wing of the Baseball Hall of Fame. He joins broadcasting luminaries such as: Vin Scully, Red Barber, Mel Allen, Jack Buck, Ernie Harwell, and Dick Enberg. The award, named after former Baseball Commissioner, Ford C Frick, honors those who have demonstrated “excellence in baseball broadcasting.”

From the “Baseball Game of the Week” in the 1980s, through his hosting of the Olympics, the late-night interview program “Later…with Bob Costas,” his programs on HBO, and more, Bob has been a prominent part of the coverage of every major sport over the past three decades. His thoughtful commentaries on a variety of issues have established him as one of his generation’s most distinctive voices.

The 2016 Rio, Brazil Summer Olympic Games were Bob’s 12th and final for NBC. Additionally, he hosted seven Super Bowls, and was part of the coverage as either play-by play announcer, or host of seven World Series, and ten NBA Finals. Bob was also a prominent part of NBC’s presentations of other major events, including the Kentucky Derby, Preakness, and Belmont Stakes, as well as the U. S. Open Golf Championship.

Following the 2016 NFL season, Bob announced that he would no longer be hosting NBC’s Sunday Night Football coverage, and would also conclude his quarter century run as host of NBC’s Olympic coverage.

At the same time Bob increased his presence at MLBN, where he has been able to return to his first love, baseball – contributing interviews, commentaries, and play-by-play for the network.

In 2020, Bob joined CNN as an on-air contributor offering commentary and perspective on a wide range of sports related issues. And beginning in 2021, Bob returned to HBO with Back on the Record. As with his earlier HBO programs, the show is a combination of interviews and commentary, featurning prominent figures from sports and fields outside sports.

Bob is a native of Queens, New York and grew up on Long Island. He attended Syracuse University in New York, where he majored in communications. He began his professional career at WSYR-TV and radio in 1973 while studying at Syracuse before joining KMOX radio in St. Louis in 1974.