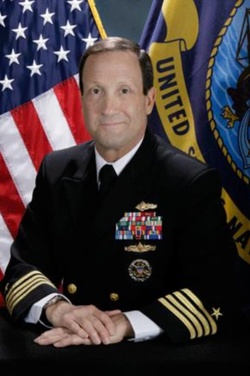 Wayne Porter holds a PhD in Information Sciences and two Masters of Science degrees – in Computer Science and Joint C4I Systems Technology - from the Naval Postgraduate School. Military duty included Japan, England, Italy, the Balkans, Bahrain (Navy’s Director of Intelligence in the Persian Gulf/East Africa), and three tours on the personal staff of ADM Mike Mullen, including Special Assistant for Strategy to both the Chief of Naval Operations and Chairman of the Joint Chiefs. He is a “Walton Fellow” at Arizona State University’s Global Institute of Sustainability and recently served as Chair, Systemic Strategy and Complexity at Naval Postgraduate School in Monterey, Calif. He retired from the Navy in July 2014 after 28 years of military service and is currently an independent systems and strategy consultant.

Cited in Marquis’ Who’s Who in America, his civilian and military awards include the Ellis Island Medal of Honor, the Vice Admiral Rufus B. Taylor Award for Professional Excellence in Naval Intelligence, the Defense Superior Service Medal, four Legions of Merit, and the NATO Meritorious Service Medal.

Wayne’s doctoral dissertation was an action research case study in which he used system dynamics to model the Steinbeck Innovation Cluster strategy he helped develop linking the technology and innovation of Silicon Valley with the agriculture and aquaculture industries of Monterey County, California and the Salinas Valley. Articles describing concepts of that strategy have appeared in the Financial Times and Forbes Magazine.