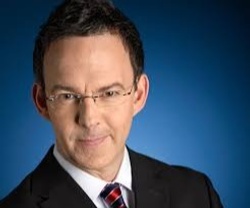 Tim Washer spent 20 years at IBM, Cisco and Accenture mostly feigning interest on conference calls. Moonlighting as a comedy writer/actor on SNL, Conan and The Late Show established him as a Subject Matter Expert in nonsense, and he applied humor to humanize some of the world’s most boring brands. He uses laughter to help corporations capture attention, show empathy, build rapport and make a persuasive case with B2B technology audiences on topics such as the Internet of Things and mainframe computers, where the comedy writes itself.

Tim studied improv under Amy Poehler, comedy writing with The Colbert Report executive producer Tom Purcell, and has appeared on the Onion Sports Network, HBO’s Last Week Tonight with John Oliver, and a T-Mobile commercial with Catherine Zeta-Jones. Tim has written and performed custom PowerPoint Comedy at corporate events for Deloitte, CDC, Google and The White House. His award-winning corporate work has been featured in The New York Times, WSJ, Ad Age, ADWEEK, and Fast Company. He’s presented at SXSW, Harvard Business School, and Forrester’s CMO Forum. Tim holds an MBA from McCombs at UT Austin, where he majored in PowerPoint.