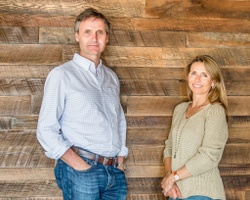 Scott and Ally Svenson are the co-founders of MOD Pizza, the original super fast pizza concept known for its individual artisan-style pizzas and salads, and people-first culture. Founded in Seattle in 2008, MOD has been named the fastest growing restaurant chain in the US (Technomic) for the last two years and was recently named “the most loved brand” by Foodable.

The couple started their entrepreneurial journey in London in 1994, when they founded Seattle Coffee Company, growing the brand from to 65 stores in less than 24 months – and introducing the UK to the world of made-to- order espresso drinks and the coffee bar culture. In 1998, Seattle Coffee Company was acquired by Starbucks as their entry into the European market. Scott remained on as President of Starbucks UK, and subsequently President of Starbucks Europe, while Ally helped to oversee the transition of the Seattle Coffee Company stores to Starbucks branded stores. While in the UK, the couple were also instrumental in growing the Carluccio’s Caffè brand, a thriving London based operator of Italian deli/cafes, which with their help, expanded to over 50 locations in the UK and Middle East before going public.

In 2000, the Svensons returned to their hometown of Seattle to raise their family. With four growing boys, they soon discovered a need for family-friendly dining options that were fast, healthy and affordable. Their entrepreneurial spirit again kicked in, and they began exploring ideas that combined their love of business, people and purpose. The first MOD opened in 2008 in downtown Seattle, and the “pizza with a purpose” brand has grown from there.

At its heart, MOD is a platform for doing good, and is rooted in the idea that if they take care of their employees (the MOD Squad), they’ll take care of the customers, and the business will take care of itself. They call it Spreading MODness – and its ripple effect has taken hold in MOD’s more than 345 stores system-wide across 28 states and the UK, and with their more than 7,000 MOD Squaders. Today, Scott serves as CEO and Ally as Chief Purpose Officer, and they remain inspired and motived by the opportunity to build a business that makes a positive social impact.

Scott and Ally are both graduates of Bellevue High School in Bellevue, Washington – Scott continued on to Harvard, and Ally to Wellesley College. Since moving home from the UK, they have been deeply involved in the Seattle and Bellevue communities, contributing efforts and resource to many non-profits and to their local schools. Scott is also a member of the Board of Advisors of the University of Washington Foster School of Business and a member of Young Presidents’ Organization (YPO) and the World Presidents’ Organization (WPO). Ally is on the board of the Tateuchi Performing Arts Center, and together they are board members and advisors to Evergreens, a Seattle based salad concept.

Without a doubt, Scott and Ally’s greatest accomplishment is the raising and launching of their four boys, Tristan, Dillon, Caspian and Jasper