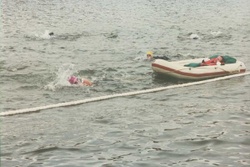 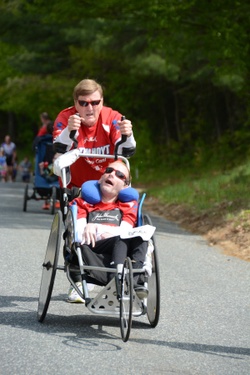 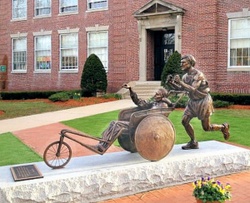 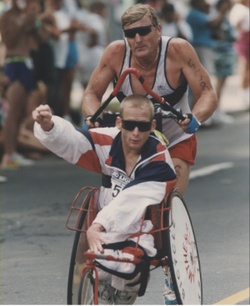 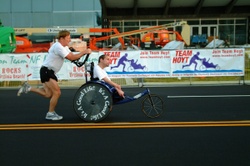 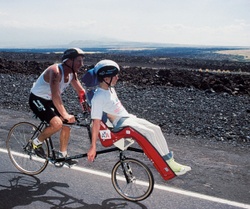 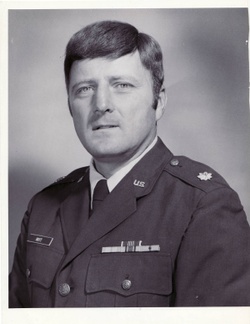 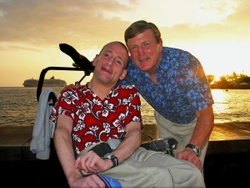 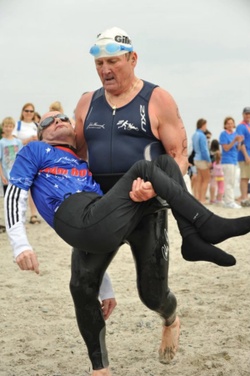 Rick Hoyt loves the Boston Marathon. He has run it more than 32 times. But he can't do it alone. Because cerebral palsy has confined him to a wheelchair since birth, Rick Hoyt needs a push. That's where his father comes in.

Dick Hoyt loves the Boston Marathon too. He has also has run it 32 times and now looks forward to a friend pushing Rick in future marathons. Dick will still doing shorter distance races and triathlons with Rick. But he too needed a push to get started.

Rick, then a student at South Middle School in Westfield, came home from watching a high school basketball game one day and told his father -- with the help of a head switch atop his wheelchair that works as a mouse for his voice activated computer -- about a charity road race staged to benefit a student from a local college who was recently paralyzed. He told his father he wanted to be a part of the race to show this student that life goes on, even if you are confined to a wheelchair.

Dick Hoyt accepted the gentle push. Never mind that he was 40 years old and ran just once or twice a week -- "to keep the weight down." Never mind that he ran a mile at a time -- at most. Never mind that he was not only being asked to run five miles, but to push his son and the 50-pound wheelchair with him. His son wanted to be a part of this race. A friend snapped a picture of the father and son as they crossed the finish line that afternoon. "It's the biggest smile you ever saw in your life," Dick says of the look on his son's face. "Rick's still got that picture at home."

That's how it started. Since then, Rick and Dick Hoyt have completed 72 marathons and 257 triathlons - over 1100 total race events in the last 37 years. They also crossed the country biking and running, completing the 3,700-mile trek in 45 days. And aside from their tremendous physical achievements, the Hoyts have been opening plenty of eyes along the way. "When we first started, nobody wanted us," says Dick, now 75 years old. "Nobody would come near us. But we just ran every weekend and after a while people would finally come over and talk to us and they could see Rick could understand them and that he had a personality and a sense of humor. "We started breaking down a bunch of barriers. We have competed in races all over the world - El Salvador, Germany, Japan, Barbados. We're breaking down barriers about people with disabilities."

Now 53, Rick Hoyt is a high school and Boston University graduate. He has his own apartment and, with the help of care attendants, is able to lead an independent life. "I believe Rick lives a happier life than probably 95 percent of the population in the world," his father says. "He can't talk, he can't move his arms, he can't walk, but people see what he can do and they say, Hey, he can get out and enjoy life, just like everybody else.' "

Dick travels the country educating audiences about disability awareness and sharing the Team Hoyt motto of "YES YOU CAN".