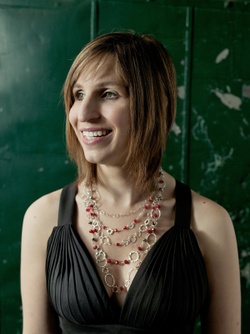 Mezzo-Soprano and author Laurie Rubin has performed the title role in Rossini’s La Cenerentola, Karen in Gordon Beeferman’s The Rat Land with New York City Opera, Penelope in Monteverdi’s The Return of Ulysses at the Greenwich Music Festival, and is currently playing the role of the witch/voice in Lisa Bielawa's ASCAP Foundation Deems Taylor/Virgil Thomson Multimedia Award winning episodic opera, "Vireo." She has given recitals at The John F. Kennedy Center and the White House in Washington DC. Carnegie Hall, and Wigmore Hall in London.

In 2013, Ms. Rubin embarked on a national tour performing a concert pairing musical selections with excerpts from her memoir published by (Seven Stories Press) which details her story of growing up blind, coupled with the growing pains of adolescence and her unique career ascendance in the world of classical music and opera. As lyricist, Rubin has collaborated with composers Bruce Adolphe and Jennifer Taira in new classical music, pop, and musical theater repertoire. She took part in the competitive Lucas Artist Residency Program’s Composer’s and Musician’s Fellowship at the Montalvo Arts Center. In November 2014, the new musical, "Peace On Your Wings," for which Rubin served as lyricist and co-bookwriter had its world premiere on Oahu, and subsequently toured the neighbor islands and Los Angeles for its West Coast premiere to enthusiastic audience response and critical acclaim.

Rubin is a sought after speaker for a diverse array of audiences and events, including educational events for middle and high school aged youth, conventions for women leaders, and disability advocacy groups, giving presentations on a variety of topics, including overcoming the effects of bullying, and carving a successful path and defying stereotypes associated with a disability. Her recent presentation for over 800 6th graders in Highland Park was featured in the Chicago Tribune on September 10th 2015. Rubin will be performing and speaking at the Ted Med Conference in November of this year about conquering fears.

Ms. Rubin is also co-founder and associate artistic director of Ohana Arts, a performing arts festival and school on Oahu.