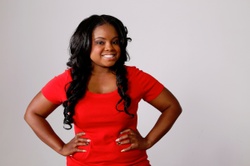 January 2014 The OWN Network (The Oprah Winfrey Network) featured Hydeia on “Oprah’s Where Are They Now”, to date Hydeia is one of thee most requested update by fans.

Over the last 24 years, Hydeia has become a notable speaker and guest panelist at many of America’s most respected educational institutions including Duke University, Morehouse School of Medicine, UCLA, USC, and Howard University. Hydeia has been a featured speaker for the International AIDS Conference in 2006. Hydeia has been a featured speaker main stage at 2000 & 2007 Essence Music Festival as well as the 2007 AIDS Rally at the Potters House lead by Bishop TD Jakes, in Dallas, Texas.

Not since Ryan White has a young person spoke out, on an international level, so passionately about having living with AIDS. Hydeia is one of few young activists to follow in his footsteps and speak out on an international level about being effected by the HIV/AIDS virus. Broadbent is also considered a pioneer as the first African-American youth to speak up and speak out about the epidemic. Ebony Magazine named Hydeia one of the Most Influential 150 African Americans in 2008. She has been honored with an American Red Cross Spirit Award and an Essence Award.

In 2010 Hydeia was invited by the BET Networks Chairman/CEO Debra Lee to participate as a panelist in the First Annual Leading Women’s Defined Summit in Washington, DC. Hydeia also received an award for Health Education and Awareness from WEEN (Women in Entertainment Empowerment Network).

Hydeia Broadbent also had the honor of being selected by TheGrio.com a division of NBC News, TheRoot.com and Ebony Magazine as one of today’s Top 100 African American History Makers for Power 100 for 2011.

Today, Hydeia is a distinguished international, public speaker and HIV/AIDS activist with a mission to educate people of all ages. She has an innate ability to bond with any audience. When addressing the public about the issues of HIV/AIDS, her primary goal is to provide a clear understanding of how to avoid at-risk behaviors through self-examination and informed decision-making. She succinctly stated “...with all that we know about the virus, it is clear to me that contracting HIV/AIDS today is a choice and we can’t allow anyone the power to make that choice for us!”