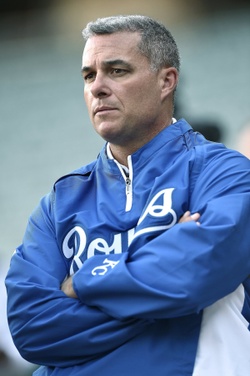 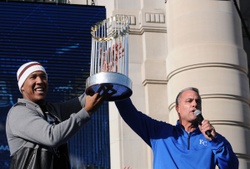 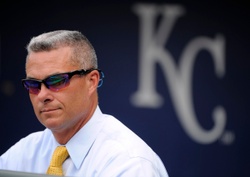 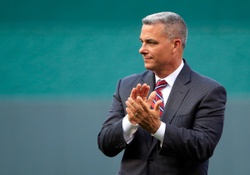 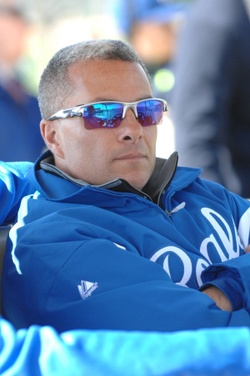 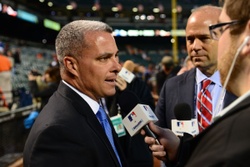 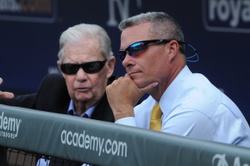 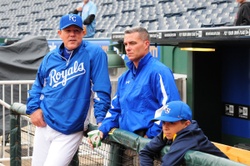 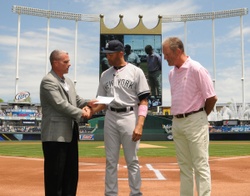 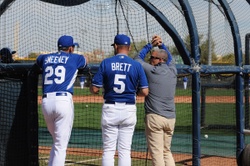 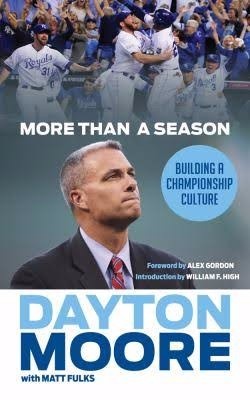 Dayton Moore begins his 10th full season with the Kansas City Royals, being named Senior Vice President-Baseball Operations/General Manager on May 30, 2006. He officially assumed his duties, becoming the sixth general manager in franchise history, on June 8, 2006.

From day one, the goal Moore set out to accomplish was bringing a World Championship back to Kansas City, a dream that was brought to fruition in 2015. The Royals bested the New York Mets in five games to win the franchise's first World Series championship in 30 years. The club became just the fourth since 2000 to reach the Fall Classic in back-to-back seasons after coming up just short of a title in 2014.

The 2015 season was one for the ages as Kansas City stormed to its first American League Central crown, winning an A.L.-best 95 games, which was their highest total since 1980. The club became just the second in Major League history to improve its win total in six-straight seasons. Along the way, the Royals set records in attendance, drawing 2.7 million fans to their 81 home games; local television viewership, recording an MLB-best 12.3 household rating during the 2015 season; and All-Star selections, sending seven players to the Midsummer Classic in Cincinnati, including four position players who were named starters.

For his part in the success during the 2015 season, Moore was named the Esurance MLB Award for the Best Executive. It marked the second-straight season that the Royals' GM earned the honor.

Keeping homegrown talent has been key to the Royals' success as half of KC's 2015 postseason roster played at least one full season in the club's minor league system, while 11 of those players were either drafted by the Royals or signed as non-drafted free agents. Since joining the franchise in 2006, Moore and his staff have tirelessly worked to build a consistently strong farm system that was rated by Baseball America, MLB.com and ESPN.com as the best in baseball in 2011. The entire operation was honored in 2014 as the 'Organization of the Year' by Baseball America, marking just the second time the franchise has won since the publication debuted the award in 1982.

Moore's tenure in Kansas City has been one of the most successful runs in franchise history as the Royals have boasted 12 Rawlings Gold Glove Awards, 20 All-Star Game selections, two Louisville Silver Sluggers and a Cy Young Award winner in his first 10 seasons. Over the past three seasons, the Royals have won more games (270) than any other American League club, while their .556 winning percentage is fourth-highest in the Majors in that span.

Moore, a native of Wichita, Kan., brought an impressive resume to the Royals in 2006. He had previously worked for the Atlanta Braves organization since 1994, most recently serving as Assistant General Manager/Baseball Operations since August, 2005.

Moore was presented by the Atlanta Braves 400 Club with its Ivan Allen, Jr. "Mr. Baseball" Award, given to "the person who has contributed significantly to the promotion of baseball in the Atlanta area" in February 2006. He was also awarded the 2005 Executive of the Year by the Mid-Atlantic Scouts Association. He was named by Baseball America in 2005 as one of the Top 10 Up-and-Coming Power Brokers in Major League Baseball and in 2004, was named the top general manager prospect by the same publication.

Moore played a key role in a majority of the Braves string of 14-straight division titles. Under the leadership of former Braves and Royals General Manager John Schuerholz, the Braves earned the prestigious 'Organization of the Year' Award from Baseball America several times, including 2005, when 18 rookies contributed to a team that posted 90 wins. The Braves won at least 100 games five times between 1997-2003 and had not won fewer than 88 games in any non-strike shortened season since 1990 prior to the 2006 season.

Prior to joining the Braves organization, Moore served as an assistant baseball coach at George Mason University from 1990-94. While working on a graduate degree at GMU, Moore also managed the Winchester Royals of the Shenandoah Valley League from 1991-93.

A leader in the Kansas City community, Moore is a regular speaker at numerous community events each year. In 2013, Moore started the "C" You In the Major Leagues Foundation. It was created to support youth baseball, education, families in crisis and faith-based programs and organizations.

Moore was a member of the Board of Directors of the NAIA's Champions of Character program from 2007-10. The program instills an understanding of character values in sport and provides practical tools for student-athletes, coaches and parents to use in modeling exemplary character traits. Following the 2014 season, Moore was named the Kansan of the Year by the Native Sons and Daughters of Kansas, elected to the Kansas Baseball Hall of Fame and tabbed the Alumnus of the Year at George Mason University. He was also named the "Executive of the Year" by the Kansas City Sports Commission.

Moore and his wife, Marianne, are proud to be involved with the City Union Mission of Kansas City including their service as co-chairs of the Women Who've Changed the Heart of the City banquet in 2011 and 2012.

Moore graduated from George Mason in 1989 with a degree in physical education and health. Three years later, he earned his master's degree in athletic administration from GMU. He and his wife, Marianne, reside in Leawood, Kan., and have two daughters, Ashley and Avery, and a son, Robert.